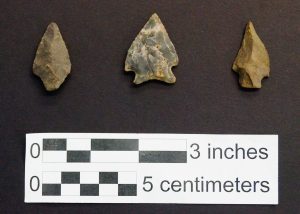 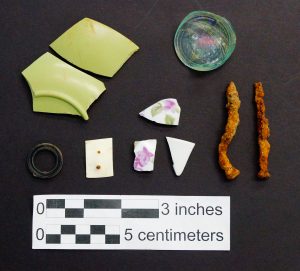 Excavation of the first five-foot square unit identified diagnostic prehistoric artifacts, a buried plowzone (agriculturally worked) layer, and what appeared to be a thick layer of natural subsoil. It was not looking good for our client as the presence of a potentially significant archaeological site could have become a costly enterprise in data recovery efforts. But here is where doing that little bit extra becomes so important.

After finishing up the unit and documenting it, we continued excavation in one quadrant of the unit for good measure. What we found surprised even us. 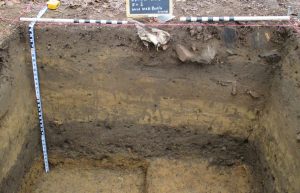 Underlying this “subsoil”, we encountered another buried plowzone layer. This meant that all of the diagnostic artifacts we were finding in the layers above the “subsoil” were not original to the site. They were imported with the layers of fill deposited atop the property. The prehistoric site we found was not a site! Furthermore, the subsoils we encountered beneath the lower buried plowzone exhibited redoximorphic qualities. That meant that these were soils prone to frequent flooding. In other words the plowzone capped wetland soils.

Excavation Unit 3 Profile (Note the reddish gravel at the lower level – this is part of the identified channel lag).

Excavation Unit 3, situated in another portion of the property, consisted of a three-foot square unit that revealed not only more layers of fill, but also an underlying layer of channel lag. Portions of this property had at one time long ago been an active stream channel.

Digging a little bit deeper into the past ownership of the property revealed that during the early part of the twentieth century it was owned and occupied by the Township’s mayor. Around this same time, a neighboring park and golf course complex designed by the Olmsted Brothers firm was under construction. Aerial images taken during the park’s construction showed large mounds of earth stockpiled in the back of our subject property. All of this information taken together means that as soils were brought in to help build the new park the town’s mayor also paid to have fill spread over his own land. So not only did we identify that our site was imported with fill, but also when it was imported.

Because of these facts, we were able to determine that the “site” revealed during the Phase IB was not original to the property and also did not qualify for inclusion on the National Register of Historic Places. The NJHPO concurred with our findings and our client was issued their wetland permit. So the value of digging a little deeper in both a literal and figurative sense helped us in providing our client with a successful conclusion while saving them from a hefty expense.